Every year, on the eve of the New Year, I look back at my year in review to see what I've achieved, what wonderful things happened...prayers answered in both - a definite "YES" and "NO!" The things I've learned...have I moved forward? The new experiences that have added to my growth...mental, physical, emotional, and spiritual. What strongholds I've broken that were pulling me down, what strengths I've built up. My friends...old and new. My family and how beautifully it is growing.

I don't have the tendency to count the difficult times, the personal battles I've fought...with health issues or any other. I don't say they are forgotten. They aren't really forgotten...but they aren't under focus. They remain faint memories because of the lessons I've learned from them...and these are what I'm grateful for; the learning and growing experiences and the lessons.

So, this year too, I look back with immense gratefulness to God for His blessings and care throughout the year. I look forward with anticipation of many more new beginnings, new experiences {pleasant :)}, strengthening of existing relationships...family and friends...

Further growth in my personal life, more discipline in maintaining good health, though, I've done pretty well in this area so far. Developing in new and better ways - my interests in blogging, reading and writing {I'm so bad at discipline in this area!}. Doing more towards getting 'that' cookbook which has been cooking in my mind for some years now! {Discipline so required here!}

But all in all, as I walk through my life in the year that's swiftly drawing to a close, I am satisfied and content with myself. As always forever grateful to the Lord and as always hopeful, trusting and believing for His guidance and His light to be upon us in the coming year too.

I love a good joke and a good laugh and that's how I'd like to bid farewell and ring out the old and ring in the new: with prayers and praise, good humour, good cheer, mirth, and joyfulness...God willing that's how we'll transition from 2016 to 2017!

So here's a poem that was written by Khushwant Singh when he was ninety-two years old. 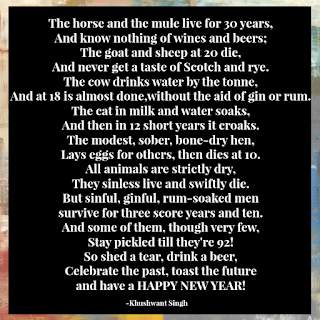 Khushwant Singh (born Khushal Singh, 2 February 1915 – 20 March 2014)[1] was an Indian novelist, lawyer, journalist and politician. Born and raised in Hadali, Punjab (now in Pakistan), he studied law at St. Stephen's College, Delhi, and King's College London. After working as a lawyer in Lahore Court for eight years, he joined the Indian Foreign Service upon the Independence of India from British Empire in 1947.
He was appointed journalist in the All India Radio in 1951 and then moved to the Department of Mass Communications of UNESCO at Paris in 1956. These last two careers encouraged him to pursue a literary career. As a writer, he was best known for his trenchant secularism, humour, sarcasm and an abiding love of poetry. His comparisons of social and behavioural characteristics of Westerners and Indians are laced with acid wit. He served as the editor of several literary and news magazines, as well as two newspapers, through the 1970s and 1980s. Between 1980-1986 he served as Member of Parliament in Rajya Sabha, the upper house of the Parliament of India.


Khushwant Singh was decorated with the Padma Bhushan in 1974. But he returned the award in 1984 in protest against Operation Blue Star in which the Indian Army raided Amritsar. In 2007 he was awarded the Padma Vibhushan, the second-highest civilian award in India.
(courtesy: wikipedia.org)