Soon it will be Christmas Day 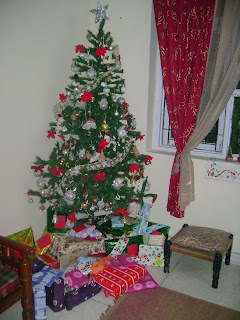 Soon it will be Christmas day! That’s what I said to myself, not in the way it should be said with excitement or great, joyful anticipation....I was panicking. I had everything ready for the Christmas cake...but power cuts (long, erratic, and frequent) were the pain in my you-know-where. I knew exactly where I was going to put up the tree, and the nativity and the this, that and the other...but getting the boxes, in which they were packed safely last year, down and opened needed another back and pair of hands. My back and arms couldn’t, wouldn’t and shouldn’t do it, thus saith my doc! And I had to adhere.

That was yesterday’s lament. As I type this out, I am overwhelmed by the aromas of freshly baked cakes, wafting through the home as they sit cooling on racks in the kitchen. I managed to bake three so far. There was a moment, actually a long time that saw my chin touching the floor. Just as I had poured the cake mixture into the baking tins, the power went off. I thought all was lost...one and a half hours later power was restored and joy of joys, nothing went wrong! I plan on doing another three this evening. I’m keeping all fingers and toes crossed. As for the decorations, Lolita has offered to help me out and she’s promised to get the boxes down and opened this Sunday and she’d also unwrap whatever I needed from them. Well that’s a good start to the day. Positivity and good spirits reign Hallelujah!

I’m in the process of planning Christmas dinner. Since there will be two vegetarians as well, it is challenging to not repeat the dishes I made last year and the year before that. Is it important that I don’t repeat the dishes? Am I over-thinking things too much? A psychologist I know says I do that....I hate to admit it but she’s right.

I keep slipping in and out of the 16th century to the 21st. I’m reading a book called The Emperor’s Writings. It’s all about the Mughal King Akbar’s life and times. Written by Dirk Collier, it has the style of an autobiography. The account unfolds through Akbar’s letters written to his son and heir to the throne, Salim (who would go on to become better known as Jehangir) The Mughal period in India has always fascinated me, especially the times of Akbar, Jehangir and Shah Jehan. I have enjoyed visiting many monuments in Delhi and Agra, built during this time. But Akbar certainly catches my interest the most.


I have stepped out of the Diwan-i-Khas into my humble abode for now and I better get cracking with the chores at hand...I do not have a retinue of servants and attendants at my beck and call as the emperor had!!