In Retrospect: The Fortnight That was

A lot has happened in these last two weeks. Some things were beyond my wildest dreams and a few not quite as I expected. Dealing with the good and not so good proved to be a forward and backward cha-cha. There is a lot to look forward to with great expectations, and on the flipside the premature closing down of a project well begun has pushed me back where I was.
Let's start with the good. I prefer that. Well for starters, we're expecting two new additions to the family early next year. The news was kept under wraps but the 'cat' got out of the bag earlier than it was intended to! Since it was out, I informed my friends and family back home. I felt so elated sharing the happiness. It is true, happiness shared is happiness doubled. So why did we keep the news secret? Generally, down our side, people don't disclose such things till the fifth or sixth month of pregnancy. Call it superstition, plain prudence or wise discretion, that's the norm. Our efforts at secrecy failed because my daughter-in-law, M, was advised rest by her doctor, which meant an application for leave. Once the office knew, everybody knew! The few who were in the dark didn't have to wait long.
Last Sunday was M's birthday. Papa-to-be designed a cake which left nothing to be guessed. So everyone knew about the good news before they were supposed to! So much for zipping our lips. Here's the tell-all cake:l 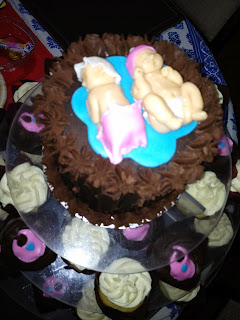 Isn't it so adorable!
Getting her a gift proved to be more difficult for me. Because I don't understand or speak Spanish of any useful worth, going out shopping on my own would have been more frustrating than fruitful. So I  decided it would benefit me, in more ways than one, to suggest a 'practical' class in the Mall to my Spanish tutor. She thought it was a brilliant idea. I thought so too! I got a free ride, a translator and I did get to practice my Spanish (which is awful) and buy the gifts. 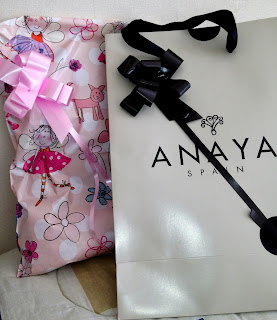 My first grandchild was also born abroad. However I couldn't be there. In fact I have missed so much of her growing up. She's three and a half and I know her only through Skype and Face Time! I felt bad about it then and carried that disappointment with me. However, in retrospect, I find God puts me where I need to be rather than where I want to be. I would have been of no earthly use to anyone three and a half years ago. I was barely of any use to myself physically. So I am grateful for this double joy; a bonus.


I have lost a few kilos, hallelujah, and I feel lighter in this area too! I hope I can keep the lost pounds just where they are: LOST! But if truth be told, it's been a sad story of lost & found for some years...sigh! This time round I took a positively decisive step toward the loss program. I discarded all the extra large clothes and kept only the size I fit into now. Then I looked into the mirror and said, "You will have nothing to wear if those pounds and inches find you again. Take that as you may, but that's how it stands." Do you think it will work...the threat and all? Right now There's this huge temptation staring me in the eye: 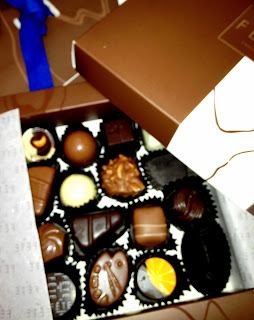 Get thee behind me Satan! Would it be very bad to take one bite...?
I went on a long road trip to the south. We had a night stopover in Chillan at a serene and tranquil place, I've forgotten the name of the resort, and drove sixty-five kms to Las Termas de Chillan the next day. At the start of the journey from Vina, I was happy and excited. This was the first long road trip after many years. My bane, travel sickness, was not far behind. Midway to Las Trancas it hit. As a result, I had to be off loaded at base further ahead, from where the others drove up into the snow-clad mountains. Though I tried my best to convince my son that I would be fine and no one had to stay with me, M stayed back too. I did not like that at all. She was missing all the fun because of me. I was the only one in this group of nine who was on the wrong side of fifty. The rest were youngsters her age. She was annoyed, which was to be expected, I was hurt to find myself the villain of the piece. I detested that role completely. I was downcast for the rest of the day and night. I retired early when we got back to Chillan. A sound sleep and an early morning quiet hour of communing with the Lord saw me bouncing back to being true to my name! I forgave myself. Thereafter, nothing could offend me as I refused to take offence.  I regained a sense of peace and calm. I put aside the incident. But it is one thing to regain your peace and quite another to maintain it. The feeling of being the wrong person at the right place at the wrong time for someone, led to sadness and loneliness. Forgiveness only released me from unpleasant emotions. 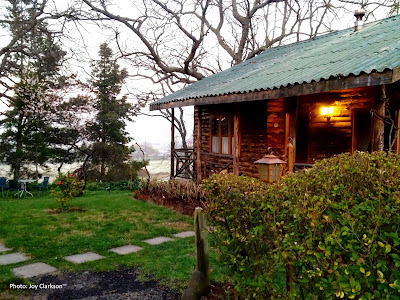 "What do you do with your love for someone when they die? Or the memories they've left? Do you pack them up in moving boxes and write strange names for them across the top? Then where do you put them and the rest of a life you were supposed to share with a person who left without warning?" ~Jonathan Caroll
Back in Chillan the next day, sitting in the lap of nature soaking in the beauty and awesomeness of God's creation, my mood was contemplative. Would it have been better if...what if David were here...would I even be here...my mind was spinning. I suppose a teeny-weeny bit of hurt remained from the previous day. There was no turmoil, on the contrary there was peace, there was joy, there was serenity, but there was pain too. Not the kind of bruising, harsh, bitter pain of anger or injured pride but the kind only one who has known deep love and loss can feel. The heaviness of regret, the longing for what wasn't and couldn't be. It was like a tiny soap bubble, its surface reflecting all the colours of the rainbow as it floated in the sunshine among the overflowing cups of joy. It was a contradiction with its emptiness in a world dominated by happy memories. Was it symbolic of my state of mind? Is that how I actually was...light, bouncing on the wind, showing off sparkling colours; a joyous exterior that belied the vacuousness within? But I was not empty within.
An empty pitcher can give nothing. I gave love, forgiveness, understanding, acceptance. I had peace, I had patience, I had joy. I believed, I trusted, I laughed, I cried. It was then I realized I was full. There was no empty space. I was floating around in search of an answer. An answer I already knew but didn't recognise. An answer that was so clear to the question: "Then where do you put them (memories) and the rest of a life that you were supposed to spend with a person who left without warning?"
I was living the answer. I knew where to put "them" and the "rest of my life." I was already anchored. That was the truth. The bubble was just that....ephemeral, a moment of illusion.
The realization was uplifting.
I had been in the doldrums with my packed lunches packing up on me, though I didn't admit it. The dual purpose of taking up the cooking project had been to keep myself occupied and earn something too. The need to be occupied was to fill the long hours of being alone. The need to earn was to satisfy my wants and little indulgences. But when I looked back I saw I never ever had to worry about my needs. They were always met. My prayers had never gone unanswered and finances had always miraculously been enough at the right time. I knew why the food project had died out and perhaps that is why I felt worse than I should. It made no sense to fret about it. The business of packing lunches was not all that lucrative but it provided a steady flow of cash which kept me independent in terms of supplying my wants. What ever the reasons were for that stream drying up, I was not going to dwell on it. The earning opportunity came without my asking and it went the same way. If I imagined there was nothing to occupy me, could I have been wrong? Perhaps there was something else I needed to explore. Or something I was already into that needed more time and dedication. Worry never brought me anything but sleepless nights and disease. When my hope is anchored in God, I simply need to continue my walk in faith. Why not? He's walked with me all these years, He's not going to give up on me ever.
Thus went the fortnight that was. When I shut my eyes I see mostly pretty pictures of that time. I am at a place of acceptance.
--------------------------------------------------------------------------------------------------------------------------
Posted by Joy at 1:36 AM