Siblings - friends we can't get rid of! 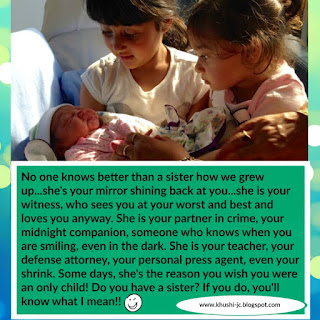 "Sibling relationships...outlast marriages, survive the death of parents, resurface after quarrels that could sink any friendship. They flourish in a thousand incarnations of closeness and distance, of warmth, loyalty, and distrust." -Erica E. Goode

We were four siblings. Three sisters and one brother. I was the fourth and the youngest for the first ten years of my life. I expected to remain the youngest...my father's pet and my mother's unruly filly. But life had something better in store. The announcement that I was going to get a brother thrilled me no end. My elder brother was my friend and my partner in crime and I enjoyed playing with boys more than girls, who I found to be "sissy" and forever crying, throwing tantrums, more interested in who was wearing what and playing 'House.' I wanted to play 'Indians & Cowboys,' 'Robbers & Police,' 'Pittoo,' gymnastics and rougher sports and games than most girls my age cared to play. So, a brother was more than welcome. What I didn't realize was that a ten year age difference wouldn't quite work out as I had envisaged...our interests would be worlds apart by the time he grew up.

I never got to develop any really close relationship with my sisters. They went to boarding school when I was six. We met only when they came home for their annual holidays. I would be in awe of them. The eldest was seven years older than me and the other was my senior by five. And later on, when they passed out of school, they left home to pursue whatever professional training/jobs they had applied for in the city. We were living in the country. My elder brother remained my pal and companion a few more years and left home too. The younger one was too young to take his place. A three-year-old isn't much company for a thirteen-year-old. I grew up through my teenage years of schooling, practically, as an only child. Since my school was very far from home I didn't have friends to hang out with on Sundays or holidays.

Books became my friends and I became an avid reader. Thanks to my elder sisters' fondness for reading there was never a dearth of books. They kept a steady supply. And thanks to an American friend who was in the American Peace Corps, and stationed in our town, we had more than enough books of all genres. I traveled with my book friends and experienced different cultures and traditions as I lived with them. This worked against me in a way as my schoolmates couldn't relate to the books I read and so I couldn't discuss them either. It created a kind of chasm.

The distances were constant between us siblings. Rarely were we all together, and even then, it was never for very long. But, whenever we were together we would pick up from where we left off as if we had never left...never been absent from home. We'd talk one to the dozen, laugh our guts out, almost literally, because we'd be doubled up in laughter our arms folded across our bellies, tears flooding our eyes.

As the years passed on we got married and home meant another place. I and my eldest sister lived in regions far from the rest and each other as well. The youngest, who joined the Army moved around from the north, in the Himalayas, to the southern region and the western arid zone. Yes, we hardly met. Those were not the days of internet and wi-fi...no mobile phones, no face time, no emails and chats. The occasional snail mail and cards made their way to keep everyone updated. Though by the time they were updated the information was already outdated!

Yet, when we gathered at one place to attend a wedding or a funeral...or I'd make an annual trip with hubby and kids in tow to meet family it would always be like we met just some days ago. Always comfortable, always fun. We'd still be howling with laughter at the silliest things, we'd still be singing the same old songs...we'd still be gossiping about the same old people. We'd bond like only siblings can.

At the time of writing, we're in the same situation of vast distances between us...in miles. I am farthest from my siblings, yet when I think about it, it is just the oceans, seas, and continents that separate us. I value physical nearness. Nothing can replace that...no internet, or WhatsApp, no face time either. But, I am also grateful for all of these. It's a bridge that connects us virtually.

I have driven through streets in Canada with my son as I sat comfortably in my chair in South America. I've been a part of the baptism service for my grandchildren; making the vows I had to make, live...as if I were there in the Canadian church myself. Face time...is the closest to personal and physical nearness.

The bond of birth and a shared childhood; same roots, same family ties, many shared experiences...survive over and beyond the distances...literally and figuratively.

Is it because we are siblings born of the same parents? No, what keeps siblings together is a relationship. And like all relationships, it takes a lot of working at to grow strong. It takes a lot of love, forgiveness; patience and tolerance, understanding and respect for siblings to grow as sisters and brothers. This is best explained by Maya Angelou in this short quote:

"I don't believe an accident of birth makes people sisters or brothers. It makes them siblings, gives them the mutuality of parentage. Sisterhood and brotherhood is a condition people have to work at." -Maya Angelou

Yes, siblings - sisters and brothers, as defined by Maya Angelou, are the friends we not only "can't get rid of" but those whom we never want to get rid of.