I discovered two things in the past few days: The truth of a prophecy, that's such a biblical word, but then I guess it fits in this case, and the deliciousness of a butternut squash soup (a species of the 'Kaddu' family) I like kaddu as a vegetable, Indian style. I also liked the kaddu halwa my mother used to make. A laborious task which she used to undertake after I'd begged her almost on my knees! But when my daughter-in-law said she was going to make a butternut squash soup for dinner, I baulked. I  could imagine a kaddu mashed up in a soup, what I just couldn't imagine was me drinking it. She assured me it was yummmmmm...and she did stretch the yumminess though I thought it was simply to psych me into drooling. Only the night would tell.


But to come back to the 'prophecy.' Once upon a time, as stories go, or rather went when I was a kid, my mother-in-law told me about a lady who would visit the family home in Barmer, quite often out of the blue. She was a very religious woman, old but healthy and mobile, and she was gifted with the ability to predict things. These things she foretold were referred to as prophecies because she was strongly anchored in the faith. On one such unexpected visits, she told my MIL that she would die when one member of her family would go into the Lord's service.


Both mama and I contemplated the meaning of this. Not because it was hard to understand the prophecy, but simply because we couldn't find more than one promising candidate who qualified as a servant for the Lord's work. This person happened to be a teenager then, but quite keen on listening to my MIL's religious talks and definitely a regular church goer. In short totally religious unlike all the other youngsters around his age. But as time went by our hope in him diminished. I told my mom-in-law that the old lady must have been a wee bit off the mark this time. She refused to accept that. I shut up. Just my mouth, not the thoughts!


Then came the day when one of the grand-daughters, her daughter's child, decided to marry a boy who was all set to become a priest. Ah! The prophetic words resurfaced in our conversations with renewed strength. Mama told me, rather triumphantly, that the old girl was not off the mark. We were off the mark. We didn't think of the girls. Now, one was going into the Lord's service and the time for the prophecy to come true was drawing near.


It made me uncomfortable to discuss the demise of my mother-in-law, in the near future (she tended to make it nearer) with her in such an objective manner. So I tried to drill holes in her theory. For quite obvious reasons it was clear her enthusiasm to prove the old lady was right, had blinded her to the fact that her grandchild was not going into the Lord's service, she was only going to marry one who was going to serve in the church.


But Queen Victoria, as I and my hubby would refer to his mother in private, could not be influenced or side-tracked so easily.


"It's the same thing," she said with a finality that discouraged all arguments. Again I zipped my lip and only my lip!


My mother-in-law passed away some years later. The said grandchild's husband had changed direction. The priest moved out of pastoring a flock and became the head of a bible college instead, while she continued in her teaching job. My MIL had gone, but the prophecy and its veracity remained a point of thought. It didn't fit in, to my mind at least. The pieces just didn't fall into place so the picture wasn't complete. At least not in the way she had thought it was.


Many years later, I learned that the only other grand-daughter, her son's child, had become a pastor, the pieces of the puzzle fell into place. I will have to tell the story further to complete the picture.


This young grandchild, 'R,' was a simple girl, with no college education. She stayed at home and did all the domestic chores. She was lively, witty and childish. So to hear she was heading a church in a big city, came as a huge surprise. Anyway, this news soon got buried with so many other things piling up and it no longer held my attention. But not for long. For some unknown reason my thoughts meandered to the prophecy again, to my MIL and to all our many conversations we had had over the years. And I had a eureka moment! Stay with me a wee bit longer, even now I have to catch my breath by the revelation!


On the last night, before she died, Mama was talking to R. It was getting late so R told her to rest; go to sleep. Mama told her to put her hand in hers. She held R's hand and closed her eyes. After some time R too went off to sleep with her hand in her grandmother's hand. When R awoke, mama had passed away; and also passed on the prophecy to the most unlikely person in her family.


Phew! Talk about soup for the soul!


And here comes the kaddu soup. I peeked into the pan as M stirred the creamy, lovely, sunshine yellow broth around. I have to admit it was inviting! Not a reaction I had expected. Soon I was impatient to taste it. She took her time cooking it just right, pouring it into the cups, dropping in the croutons...and I took the first spoonful. Yummmmmmm....I went. Had I actually been psyched?!!!! here's a picture: 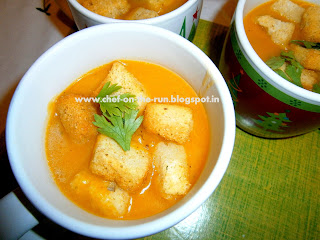 I am a new butternut squash soup nut! For my Indian friends: it's another kind of kaddu in a soup:)