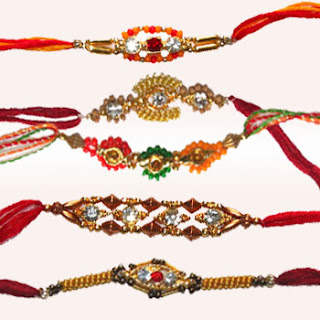 This year on the thirteenth of August, people in some states of India will be celebrating Raksha Bandhan. This festival celebrates the sister-brother relationship. The significance of the coloured and often embellished thread, which a sister ties around her brother’s wrist, is symbolic of his vows to protect her and help her if she needs his help, as long as he lives. In return the brother gives the sister gifts ; these could be gifts in cash or kind or both! The sister can demand for anything. This is an ancient custom and has its origins in Hindu mythology as well as in historical legends. Many stories have filtered down the ages but I find these two quite imaginative and interesting.


A legendary narrative about Alexander’s invasion of India in 326 BC, suggests that Roxana (or Roshanak) Alexander’s wife, sent a sacred thread to King Porus asking him not to harm her husband in combat. Porus, the Hindu ruler, who battled Alexander at the Hydaspes(Jhelum) river, honoured the request and tied the thread on his wrist as a reminder. When Porus met Alexander in battle, and overpowered him at one point, it is said that the sight of the rakhi (sacred thread) on his wrist prevented him from delivering the final blow. Of course, there is no historical record of this, but the battle ended in defeat for Porus. The legend might have been born out of the fact that Alexander did not kill Porus, instead he made him a Macedonian Satrap or viceroy.

Another well known story built around the rakhi thread is about Rani Karnavati, the Rajput queen of Chittor, a city in Rajasthan and Mughal Emperor Humayun. The Sultan of Gujarat, Bahadur Shah invaded Chittor. In order to save the kingdom, Rani Karnavati sent a rakhi to Humayun, with the request for help. Touched, the Emperor set off with his troops to defend Chittor. However, he arrived too late and Chittor had fallen. The queen along with 13,000 other women in the fortress, had committed Jauhar, preferring to kill themselves to avoid dishonour at the hands of the invading army. Humayun met Bahadur Shah sixty miles from Chittor and laid siege to his camp, blocking his return to Gujarat. Historical records and memoirs do not mention the Rakhi episode and some historians are sceptical about it, but it is mentioned in a mid-seventeenth century Rajasthani account.

My experience of Raksha Bandhan, which is not celebrated in our family, resulted from group extortion plans in college...yes it was emotional blackmail. We were a group of four girls and I was the only one who didn’t observe this ritual, so my two brothers didn’t count in our scheme of things. Raani was the other one who had ‘real’ brothers. “Your bros are our bros,” we declared and that got us two rakhi brothers. Rita was the one who had a boy friend. He was an Iranian called Rada. The majority felt, by virtue of being our friend’s boy friend, Rada became our brother too! He didn’t have a chance against this bizarre argument! All three boys took it with good humour and as we loaded our pockets, theirs got lighter. They remained our ‘rakhi’ bros until we were in college. What had started as fun and games to collect some extra pocket money ended into a sister-brother bonding! It was amazing how a little bit of coloured thread could alter attitudes and bond strangers into a sacred relationship. However, that was then...years ago in a small, conservative city. Today would be a different story.


Rada and Rita broke up, Raani died and our group lost contact as each one moved away to different parts of the country. Every year I’m reminded of my rakhi virjis and the sweetness of a relationship that was beyond mere friendship and blood ties...

Rakhi..........sacred or holy threads, made of coloured fibre and embellished with beads, sequins etc. Some are quite big and cumbersome. Most people prefer the simple threads.

Jauhar......... Mass suicide...ancient Indian tradition of honorary self immolation of women and subsequent march of men to the battle field (against any odds) to end their life with respect. It was followed by the Rajput clans in order to avoid capture and dishonour at the hands of their enemies. Such painful method (burning) was preferred over other ways like poisoning or hanging, because Muslim invaders buried the dead women instead of cremating them.(Wikipedia)


Virji...........'Vir' is one of the Punjabi words for brother. 'Ji' is suffixed as a sign of respect. I have added an 's' to make it plural and this is an anglicised way of speaking and not the Punjabi way of making plurals.