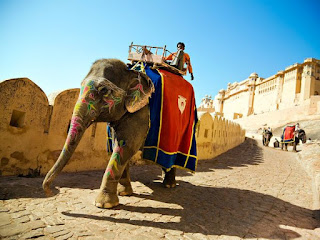 
My experiences of the close kind with animals, especially in my childhood and youth, have been with the young ones rather than the adults. Whether it was a murgabi (wild fowl) or a chipmunk, puppies of some breed or no breed, rabbits, and yes even snakes, tadpoles, frogs, fish; I rescued, adopted or simply kept them to observe their growth and development. The latter part of that goes for the tadpoles and caterpillars. Caterpillars which of course would specifically be insects, but a butterfly would come under animal too or wouldn’t it? It really doesn’t matter as I’m trying to get to the point. And the point is Anarkali.


Anarkali was a pachyderm in the Amber Fort in Rajasthan. She was one of the three (or four perhaps) elephants, which were used to give rides to the tourists. Sometimes to transport them up to the fort along the long winding path from base point in the town. Since I didn’t fancy a ride up, up and up to the fort (it looked frightening from below) we didn’t go the elephant way. However, I allowed myself to be cajoled into an elephant ride around, and inside a dedicated area at the Fort.

Anarkali, a huge female elephant, and her mahout were assigned to us for a couple of turns around the elephant route. The way to board her was to get up on the rampart, against which she stood, and climb a few wooden steps then get onto her back and seat yourself in a sort of rectangular seat which was strapped onto her. It had guardrails on all sides and one had to stick one’s legs under these and hold on to the rails. So we sat with our legs dangling over the sides of our pachyderm friend. Did I say friend?


I need to go back to the pre-boarding stage, when my fear and hesitation prompted the mahout to show me how friendly, and intelligent and courteous Anarkali was. She was told to kneel before us and she did. Then he said something and she lifted her trunk and brought it down to bless me...only she didn’t get to my head, which was her target, because I jumped away with a scream. The mahout admonished me, very respectfully of course and reassured me there was nothing to be afraid of! Then she performed a little jig for us, trumpeted, went up on her hind legs (that was terrifyingly awesome!) Finally, he told us to pat her trunk. I stretched out my hand but didn’t actually touch her. See, how friendly and tame she was! There was nothing to be scared of. Therefore, I was on her back with three others. The majestic animal began her leisurely, swaying walk. I peered down. We were quite high up, jumping off wasn’t an option. I resigned myself to the ride. What an idiot, I said to myself; these elephants give rides to so many everyday and have been doing so for a long time. What could happen here in this controlled environment?


Suddenly there was a shout from the mahout on the elephant a few metres ahead of us. He was yelling “bachche, bachche,”(children, children) and gesturing for us to turn back. Ours began to shout too and there were other workers yelling. Mingled with all the frantic yelling were the voices of excited children as they rushed in through the entry gates, and began spreading out at random. There were men, mahouts or workers, running towards the kids in an effort to herd them away from us. By then Anarkali was in a rage. She was stomping, stamping, trumpeting and shaking herself angrily, and if our hearts weren’t in our mouths we would have been screaming too. Someone managed to find a voice and ask what was happening. “Yeh bachchon se chidti hai. Is ko bachche achche nahin lagte. Is ko bahut gussa atta hai,” (Kids aggravate her. She doesn’t like children. She gets angry)yelled the mahout as he struggled to pacify Anarkali and control her.


We didn’t need instructions. We were petrified. My throat was dry; I was mumbling prayers, and kicking myself for getting into this situation, and clutching on for dear life. I was also wondering which side I’d fall if she stood up! I had already pulled my legs half-way up, careful not to pull them up all the way and free myself and risk tumbling off without the rail support holding me in place.


I do not know how long it actually lasted. It seemed like eternity. Time is irrelevant at these times...even a few minutes seemed like an hour! Anyway, the kids didn’t need much convincing, they ran in the opposite direction as soon as they saw Anarkali and realised it was a temper tantrum and could be dangerous. The mahout managed to calm her down. The ride was truncated and she turned around and went back to the starting point. We dismounted as fast as we could on trembling legs.


My big animal adventures began and ended there. This happened sometime in the early nineteen eighties! Almost three decades later, I find that the closest I’ve come to them since then has been with my pets...a Lhasa Apso, a Dachshund, a golden retriever...and it was divine!