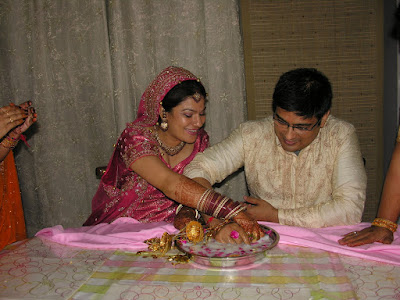 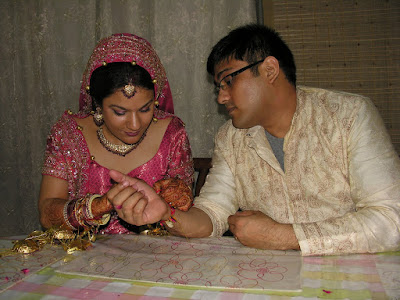 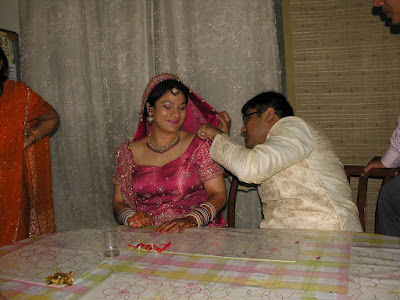 An Indian wedding is marked by its fanfare, colour, blaring music, brass band...a blend of the traditional and modern. That's how most Indian weddings are. And then when the rituals and rites are through you'd think its over, but there's another think coming up...there are wedding games to be played! Well, when I say 'games' I mean games.


I learned about these games when my elder son got married. A few of my friends from Rajasthan got the newly wed couple to play a few 'power games.' What was especially amusing about the activity was that the maximum wins decided who would wear the pants around the house! So it was obvious the bride would try her best to beat the groom.


I gathered that this was introduced to alleviate the anxiety the bride might be feeling. In India arranged marriages are usually the norm, so a girl doesn't really know the boy very well, much less the family. Besides an Indian girl doesn't just marry a boy, she marries the whole family too! It would certainly be tough for her to walk into a household of strangers who are now her family. But to come back to the games....


The first one was - searching for a ring in a thali (a big, deep, steel plate) of milky water. A ring is immersed with a lot of almond shells and rose petals. The couple have to search for it using just one hand.

The second one was - untying knots with one hand. A thick thread (dori) is tied around each one's wrist. Then the ends are knotted several times. The knots have to be untied using one hand. The winner is decided on who unties all and how quickly.


The third one was - find the cotton. Little balls of cotton are hidden on the person of the bride and groom. Hiding places could be their clothes, hair, behind the ears etc. The couple take turns locating these.


Since we don't have these games in our Christian wedding ceremonies, it was fun for us. Can't say about the couple, it was well into the wee hours of the morning and they had had a long day. Our wedding receptions are usually dinners that go on and on and on....weddings don't happen everyday, and thank God for that.